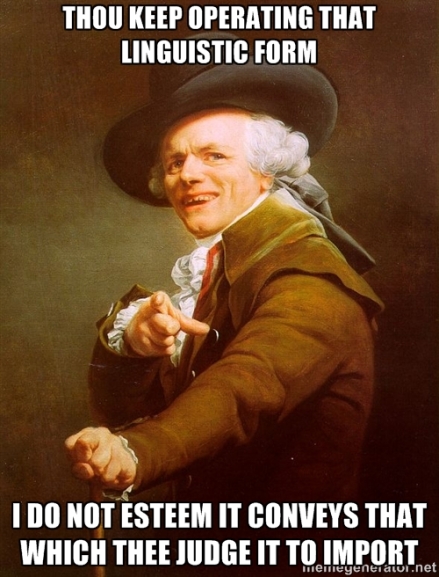 Time to confess: tell us about a time when you used a word whose meaning you didn’t actually know (or were very wrong about, in retrospect).

Alright, I confess that I have probably misused words a time or two.  However, I didn’t keep track of them over the years, so I can only admit to the one I remember most.  For the longest time, I was completely misusing the word quipped in dialogue for my books…

Quip [kwip]: n. 1. a clever or witty remark or comment. 2. a sharp, sarcastic remark; a cutting jest. 3. a quibble. 4. an odd or fantastic action or thing. verb (used without object), quipped, quipping. 5. to utter quips.

… in place of griped…

Gripe [grahyp]: v. 1. Informal. to complain naggingly or constantly; grumble. n. 11. Informal. a nagging complaint. (yes, I skipped all of the other definitions in between, because I can.)

I thought they were interchangeable, meant the same thing, more or less, but I was wrong – as you can see by the definitions – thank you dictionary.com! I could have used an array of other choices, like complained, grumbled, mumbled, sulked, etc. but I was trying to give my readers something else to see, besides the same ol’ thing.

My oldest used to be the greatest for injecting words into sentences while he was talking, and not knowing what they meant.  I’ve (thankfully) gotten him out of that habit.  While it could be humorous sometimes, other times it just left us scratching our heads.  I’m proud that he has the same love for words that I do, and now he’s making a point of knowing them, before using them!  It’s undeniable that the English language is quite difficult to master, but I grow the most frustrated with words I feel should exist, yet don’t.  So, I started taking the artistic liberty of making up my own words.  Of course, this isn’t something you want to do very often, but I do get a kick out of it.

♪ ♫ “I’m bringing word-inventification back, go ahead and tell all those nerdy glitches that…” ♪ ♫

My most recent favorite discovery is dematerialization, yet I didn’t actually make this one up as I thought I had.  It already has a definition on my favorite go-to sight.  Unfortunately, none of the word processors are aware of it, therefore continuing to stick that blasted red-squiggly line under it.  Grrr….

Dematerialize [dee-muh–teer-ee-uh-lahyz] v. 1. to deprive of or lose material character. v. (intransitive) 1. to cease to have material existence, as in science fiction or spiritualism 2. to disappear without trace; vanish

Can you guess which definition I needed it for???  😉