Over the last few years, more and more websites have made the controversial decision to close the ‘Comments Section’ on their pages.  Reuters is (perhaps?) the most recent one, announcing their comments closure at the beginning of November, inciting more negative responses than positive.  Honestly, I’ve never really given much thought to having the ability to comment or not when it came to News sites, as long as I had a way to contact the reporter/editor directly, what did it matter if everyone else could read my praise or complaint?

What I find sadly funny, is that people are acting like they’ve never not had the option of a comment section before.  That they were never restricted to debating the news in person, with friends or colleagues at work, or when they were really moved, to write the paper directly.  It hasn’t been that many years, folks.  I’m not even 40 and I still remember the days when news only came via television or *gasp* in print.  There was no internet to speak of, let alone the debate of closing one’s comment section!

I think this meme says it best: 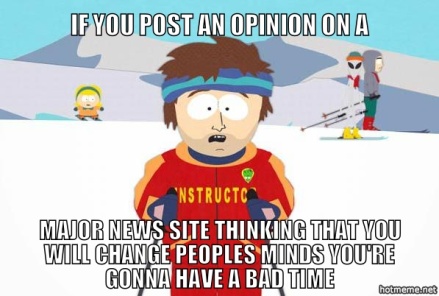 Let’s face it, the comments section of any media site is a cesspool of negativity.  In a group, face-to-face with other humans, a news article can be a conversation piece.  Opinions are thrown in, the subject swished around, and everyone involved tends to not only get their say, but ‘hears’ others.  And perhaps, those other opinions make them pause… gain a different perspective on the article and help them understand it better.  Or, maybe they’re the ones whose opinion changes others views.  Either way, it’s a conversation where the participants contribute something.

The comment sections on news sites are NOT conversations.  Mostly, they’re just a bashing. Why?  Well, several reasons, I suppose.  The main one, I believe, is because not very many people actually take the time to read others comments first.  If they had, they may have had a change of heart after reading that one rare, intelligent, insightful comment halfway down the page, rather than just mimicking the dozen or so above it.  These type of commenters, thus, are not participants in a conversation, merely ranters with an empty box at their disposal.

It’s not even a matter of Free Speech, when it reads like a bout of narcissistic trolling, is it?  So, another reason is probably due to the invincibility the anonymity of the internet has provided us.  Allowing us to say things with our fingers that we would never have the guts to say with our mouths – and it has made us so, so hateful.  So, so negative and just downright crude at times.

So, say it aloud.  Imagine saying whatever you’re getting ready to comment aloud to your spouse, your boss, your parents or anyone whom you might respect and admire.  If you can’t talk to a live person the way you talk online, perhaps you should rethink the way you word things.  Ask yourself: “Am I responding intellectually or emotionally?”  Because, trust me, no one out there is going to take the time to validate your feelings about something, but they may be hard pressed to scoff at cold, hard facts.

Even if they never comment for or against you, those who read a well, thought out comment based on the logical argument behind why you were emotionally affected, will undoubtedly be moved to think… think and perhaps look at the topic from a different angle, or at least take your perspective into more consideration against their own.

We don’t need anymore negativity fueling the furnace.  It’s already hot enough.  You can be human and be affected without lashing out in ignorance and anger.  I, for one, would much rather inspire a positive change of thought with logic, than perpetuate hate and bigotry by ranting, just to make myself feel better for five minutes.  Besides, there are much better outlets.  You know, the ones that existed before the invention of Comment Sections?