Natasha White has always been unlucky in love. The men she falls for only want one thing from her, and it isnât commitment. When her boss and on/off fling announces his engagement to another woman, she finds herself running from her feelings for him by taking a job as a personal assistant to the legendary rock god, Alex Harbourâhalf a world away. Her new boss is sexy, damaged, and insatiable, but Natasha has been a fan since she was a young girl. Conflicted by her emotions, she begins a love/hate relationship with the egotistical rock star.Alexâs intentions toward her are clear from the moment they meet, but Natasha isnât about to run from one emotionless connection to another. She is determined to keep her distance from her childhood crush, by any means necessary. When lust begins to cloud her mind, however, she becomes hell bent on protecting her heart. What good could ever come out of falling for a rock star, anyway?

“You’re pretty good at handling the media,” Alex mused once we’d taken our seats inside the cinema. “You sure know how to put them in their place. I think that was the most effortless set of interviews I’ve ever had.”

“I have a love, hate relationship with them. I don’t mind being abrupt when they overstep their mark.”

“That’s a little like us.” I had to giggle at that. “You look really beautiful tonight, Nat.”

“Maybe you should keep your eyes on the stage instead of on me.” I smirked, brushing of his comment while we watched the director and main leads take the stage. I tried to collect my thoughts, but Alex Harbour had just called me beautiful.

So many people acknowledged Alex as they wandered past us. Some stopped to congratulate him on the song for the soundtrack. I, myself, was disappointed with the song. It had a more pop feel than rock. To me, it was like he’d sold out on this track. It wasn’t the real him.

My mouth fell open when Adam Rider came over and had a quick chat with us. He was ‘the’ Hollywood actor at the moment, and gazing up at him, I could see why. The man was almost as sexy as Alex, with his dark, almost black hair, deep chocolate eyes and sexy irish accent. He wore a tux just as well, too.
“When are you going to take that jump into the film industry, Alex?” he asked, darting his eyes toward me.

“That’s never going to happen, Adam. Music is my love. We’ve had this conversation before.”

“And who is this? I don’t think we’ve been introduced.” Adam held my gaze, the same way Alex did the first time I met him. Celebrities of their caliber always had that effect on me, knocking me breathless with their beauty. It was a surreal moment to realize they were real people, not just a perfect face in a magazine or on TV.

“I…I…I’m Natasha White,” I stuttered, taking his hand when he offered it to me.

“It’s a pleasure to meet you, Natasha,” he cooed, kissing the back of my hand. Hollywood actors…were they all this smooth? “I’m not used to seeing Alex with such a sophisticated woman.” Now I was blushing.

“Natasha is my new personal assistant.” Alex’s tone was sharp as he shot daggers at Adam. “You better take your seat, Adam. It looks like they’re going to start.”

“I need to find my date anyway. Good talking with you, Alex. Natasha.” Gracefully, he disappeared into the crowd in search of his seat.

“Are you a fan of his?” Alex didn’t seem that interested in my answer. He was busy playing with the arm of his chair.

“Who isn’t a fan of his? I heard he turned down the lead role in this film we’re seeing tonight.”
“I wouldn’t know, but I’m not sure Westerns are his thing anyway.”

“Do you see him a lot? Are you good friends with him?”

“Straight Lace, do you have a crush on Mr. Hollywood? I do know him pretty well. We jam together from time to time.” He couldn’t hide his smirk. “Most actors are womanizers, though, and Adam is no different. I wouldn’t get mixed up with him.”

“I’ve heard that about rock stars, too,” I quipped. “And you definitely live up to that.”

“Maybe you need to find a more reliable source. You really don’t know me well enough to make that judgement yet.” 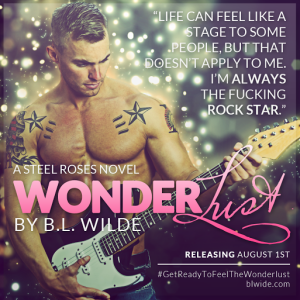 Alex Harbour – Adored by millions of women all over the world, Alex Harbour has the world at his feet and the ego to match. Once a front man to the legendary rock band, Steel Roses, he is now a solo artist. His lifestyle is sex, drugs and rock ‘n’ roll. Fame has corrupted his soul. No one is strong enough to help him face the demons from his past. That is until a certain PA walks into his life.

Natasha White – All Nat wants is someone that will love her unconditionally, but she has a habit of falling for the wrong man. Maybe secretly she is scared of commitment. Half italian, she has a fiery temper and can stand up for herself. After falling for her boss she has no choice but to take a job to get some distance between them when she discovers he’s become engaged. Running away to LA to work for the rock star Alex Harbour might be the best decision she ever made, though.

The best part about this entire book, was the lack of sugar-coating. B.L. Wilde’s characters are exposed in all of their tragic, messed up, jealous, lying, cheating, short-fused, sarcastic, drug and alcohol abusing glory. If you want a book about fantasy, this is not it. If you want a book guaranteed to irk, delight and surprise you with raw edges and realism, then hop right in!

Wonderlust is truly a character driven plot, complete with awesome sub-characters. The tumultuous mood swings were a little daunting at times, but I couldn’t stop reading. I appreciated having to work for the slow, awkward growth that some of the characters went through, rather than just being handed a cookie-cutter Hero and Heroine. I would’ve liked to have seen more of that growth from the main character, herself, especially regarding her habit of running away from her problems. I felt she could be immaturely short-tempered and unaccountably dishonest, though I never stopped rooting for her. She’s otherwise a strong woman with heart, who doesn’t sacrifice who she is against some pretty tough obstacles, and that was admirable.

Natasha White is trying to distance herself from a four-year fling with her boss, David, when he chooses to get engaged to someone else. Taking on the position of Alex Harbour’s new Personal Assistant has her fleeing London for sunny L.A. The problem? She’s had a crush on the former front man of Steel Roses since she was twelve and in less than ten seconds, he brings all of her adolescent daydreams crashing to the ground by being the epitome of the entitled, egotistical, womanizing Rock Star.

Alex Harbour has scars so deep, some of them aren’t even revealed in the book. He’s gorgeous, addicted, arrogant and far from charming. Yet, underneath all the trappings of Rock Stardom that he uses as a shield, is a man desperate for more than what life has been throwing his way. He needs someone to tell him no, to give him boundaries and give back just as good as he dishes out – on every level. The problem? He’s been safeguarding his heart for so long, he has no clue how to win a woman over without falling back on his depraved, wickedly destructive ways.

It’s simply best to accept right now, that you’re going to love Alex Harbour, even when you hate him. You’re going to experience emotions most romance novels never cover, like disgust, disappointment, a new-found, really strong dislike for supermodels, and gob-smacking “WHY DID YOU DO THAT?!” moments. Final thoughts: I hope some of the things left unfinished here find closure in the coming books, because if the rest of Steel Roses is anything like Alex Harbour, I think I’m in danger of becoming a groupie. ♥

B.L. Wilde is a British author obsessed with many things, including heated love stories and sexy men. She can often be found at her desk working on her next project, or looking at eye candy online for research purposes. She is a sucker for happy endings, but will always make her characters work for it. If you enjoy romance, suspense and erotica, let your imagination run ‘Wilde’.

Tour has been organized by