Somewhere along the evolution of my musical life, when I was supposed to be moving away from my parents’ influence and discovering my own bands, songs and tastes, my mom pulled a 180, embraced her inner rocker and introduced ME to Alice In Chains in the early 90’s; not the the other way around. It was awesome! “Man in the Box” was her favorite and that’s still a popular hit, but when “Rooster” was released, it immediately became my #1 pick.

“Rooster” was written by Alice In Chain‘s guitarist, Jerry Cantrell, about his dad in the Vietnam War and the kind of emotional and mental state it left him in after. In interviews, Jerry reveals that “Rooster” had been his dad’s family-given nickname. The song was not only a huge commercial success for the band, it more importantly helped mend Jerry and his dad’s estranged relationship. The official music video has an interview with his dad in the beginning. I couldn’t stomach the graphic footage for the rest of the video, as my dad is also a Vietnam Vet, but it’s on YouTube for those who are interested. Enjoy!

I do not own any rights to this song, lyrics or video. All rights remain with the artists and their respective agents. No copyright infringement intended.

♫♪ Rocktober Musicfest is hosted by Mary B. at Jingle, Jangle, Jungle. Check out her website if you’d like to join the event. There’s no restriction against joining after October 1st or limit/requirement to how many times you have to post for the month. It’s really easy and fun! ♪♫ 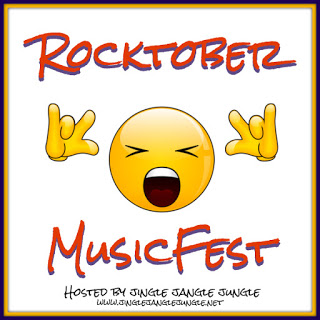 Don’t forget to click on the link below to check out all the other songs for today!