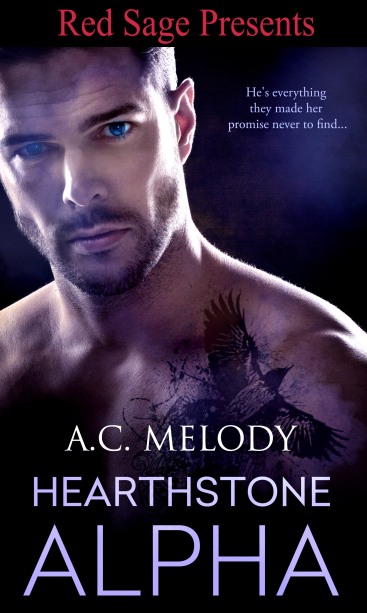 All Reyna Daniels wants is to secure her return home to Minneapolis to be with her family. The last thing she needs is to find her world completely inundated by the magnetizing, hostile Corbyn Bruschard and his group of male-model friends.

Corbyn’s not ashamed at being everywhere, since it’s his territory, and he’s certainly not going to apologize for trying to keep Reyna safe. Especially, when she’s his mate.

With all signs pointing to an old enemy’s return, Reyna’s going to have to suck it up and face her ancient Norse heritage fast, whether she’s ready to or not. That doesn’t mean she has to accept being mated to an Alpha who threatens all of her hard-earned independence. 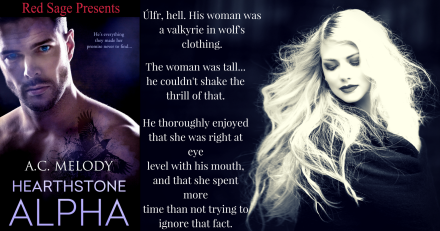 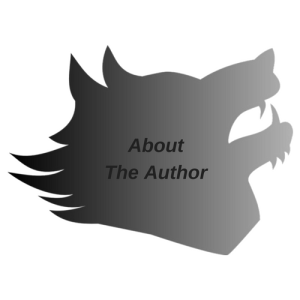 She has a weakness for hard ass Alphas and the strong women who capture their hearts, without damaging their rough edges. No matter how submissive or demure, her female leads have a core of strength and a willingness to admit their own flaws and evolve, not just demand that of their men.

When it comes to gambling, A.C. admits she’s 100% guilty of placing all her money on the underdogs, anti-heroes, and shameless whores.

Sign up for A.C. Melody’s Author Newsletter today & get exclusive Cover Reveals, Excerpts, Character Interviews/Bios and join in giveaways (She promises not to spam!): http://eepurl.com/cb9D7H 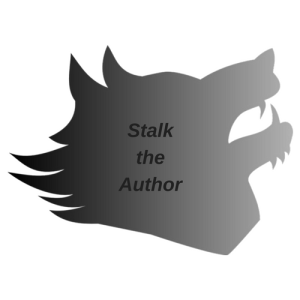 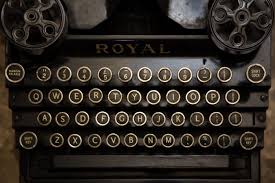 What are you writing?

So, after a great comment on my last Dear Indie post (you know who you are, lady), I got a bit of a guilty conscience on whether or not I’ve shared current updates on my series with everyone. If this is redundant for my newsletter subscribers, I apologize – just want to make sure everyone’s getting the same info.

•Scavenger (Book 2) has returned from beta readers and is in the revision process. I’m hoping to get it to my editor by the end of January. If all goes according to plan it should be published by March at the latest.

•Avarice Unleashed (Book 3) is still with my last beta reader, expecting a return by the end of this week. I wanted to get this one published by February, but just learned that my cover artist is booked all the way to April 😦 So, unfortunately, this won’t get released until sometime in the Spring – if that changes, I will let you know! *fingers crossed it’s sooner!*

Summer 2017 will see the release of a brand new Paranormal Romance series from my publisher, Red Sage. This will undoubtedly be labeled as a Wolf Shifter series and delves into ancient Norse and Greek Mythology without leaving present/modern day times. In total it will span 10+ full length novels.

•June 2017: Hearthstone Alpha (The Úlfrinn series, #1) – A Contemporary Paranormal Romance with a touch of naughtiness thrown in. This is completely done and with my publisher.

Sometime in Fall or Winter of 2017, two more new series will be introduced by my publisher.

♥ Of course, I’m also trying to make sure I stay ahead on the next installments for ALL of these series, so stay tuned for more updates as they come along & thanks for reading! 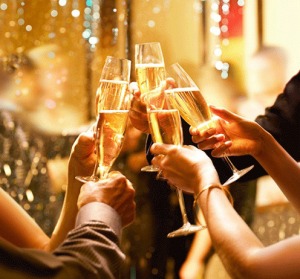 It’s official!  Today is the release day for The Zen Lounge!!  Thank you to everyone who has bared with me during my first book publication – what an experience!  And to all of the amazing staff over at Red Sage Publishing who made this day a reality!

To my best friend, Kelly: Thank you for always making me push SEND!

Mom: Thank you for editing for me (among other things) when I was crazy-glued to your side, because my hands were utterly useless and I was on deadline!  I still don’t think it’s okay for you to read this book, so I’m going to pretend that you’re not.

I’d like to offer a virtual toast to all my friends here in the blogosphere, (or drink the real stuff, if you’ve got it!), for sharing this exciting new leap with me.  This is only the beginning!

Also, for today only, you can check out my Author Interview over at the amazing Love, Lust & Lipstick Stains! 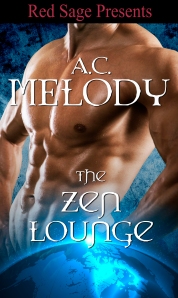 Welcome to the Zen Lounge, twenty-one floors of customizable carnal pleasures to fulfill your wildest fantasies. Even in the year 2192, it shouldn’t exist but Voryk Kade simply couldn’t ignore the urge to take a closer look. What he finds is a woman bent on ruining everything he’d ever believed to be true. She holds the key to all of Voryk’s darkest, neediest desires and despite her silence, provides the proof behind his belief that there is something far seedier going on under the high-end gloss of professional eroticism.

Enlisting the help of his closest friends, Voryk’s only goal is to keep Nexlana safe, naked and his. Unfortunately, she was already someone’s favorite pet and when Master comes calling, it’s with a vengeance and the intent of never letting her slip away again. Haunted pasts continue to resurface, only Nexlana’s might be far deadlier than any of them could have guessed—connections between her, arson, an assassination and a cold case no one ever wanted to delve into again. To stop the worst case scenario from taking place, they must finally figure out just who in the hell the Master really is.

I just received my first book review ever and it’s actually not half bad! 😀

The Zen Lounge takes place in a well- established futuristic society that’s a cross between Blade Runner and a bordello. It’s so well formed that I found myself wondering if there was a novel before this that I missed. It throws the reader in with very little explanation, which is a little daunting, and has some very dark moments that allude to sexual abuse. The romance is a bright spot though, and the sex shows how some darkness can lead to the light. This is great for those readers who crave some sci-fi in their romance, but they’ll have to deal with potentially playing catch up with the world building.

SUMMARY: Voryk Kade uses his vast wealth to live the life of a billionaire playboy. His rare acts of charity serve as a buffer to protect him from the guilt of his sister’s death and his wealth helps keep people at arm’s length. When a business rival tempts him into his pleasure house, the Zen Lounge, Voryk expects only to find information to take him down. But the woman he meets in the Lounge, Nexlana, is mute. Her presence opens a Pandora’s box of mysteries, along with the unexpected possibility of redemption. (EREDSAGE.COM, dl $4.99) Mary Bennings

Okay, what writer wouldn’t want another opportunity to talk about their book(s)???  This idea was created by the author of Ravings Of A Dead Poet and I’d like to thank Sabrina over at Books and Bark for tagging me.  I feel very honored to be included in the beginning of this fun new way to share creative minds!  And, as a bonus, it’s not even an Award! So, here are the rules as stated by Kate:

The Rules: Copy the questions below and answer them. Then, tag five people to do the tag and notify them; make sure to leave a comment including your post’s URL for the person who tagged you, so that they can go read your post!

Describe your plot in 140 characters or less:

A jaded billionaire.  A mute companion.  A perverted lawyer.  A Special Crimes Detective.  Dark and haunted pasts collide by chance…or is it fate?

Welcome to the Zen Lounge, twenty-one floors of customizable carnal pleasures to fulfill your wildest fantasies. Even in the year 2192, it shouldn’t exist but Voryk Kade simply couldn’t ignore the urge to take a closer look…

With the parents/grandparents flooding this site, who is your oldest character?

Cedron, who is Voryk’s lifelong Head of Household Staff.  He also plays a rather important part in the storyline, as a kind of father figure to Voryk and his wayward friends.

What does one of your characters look like? #selfie (find the closest picture you can!) 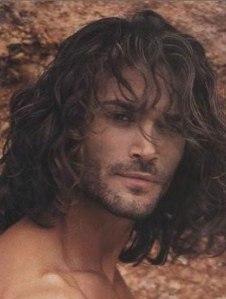 This was the closest I could find for Voryk Kade, who is the main character of my book, though his hair is not quite as long or wild.  He’s a (rebel) businessman, after all.  Still, the dark hair and eyes are perfect.  As is his potential for pulling off both Voryk’s signature, malicious glare and that sultry, confident smirk!

Designing your theme is the funnest part, so how would/did you design your book cover?

I didn’t design the cover of The Zen Lounge.  That privilege went to the cover artist over at Red Sage Publishing.  However, I do have specific style covers in mind for one of my supernatural series that I am going to try everything in my power to see happen!  I absolutely love how this cover turned out, though.  There is simply no mistaking which genre my book is with the perfect combination of those elements!  (And I love the font… really, really love it!)

Naming your blog is so difficult! What did you name your book?

The name of my book is The Zen Lounge, which I wasn’t sure my publisher would let me keep.  It’s actually the name of a business, a “Pleasure Temple,” as it were, where the two main characters meet and it plays a very significant role in the rest of the plot, as well.  I’m very glad they let me keep it!

Get your weirdest questions answered. Ask your main character one weird question, and have that character answer:

AC: Of course, silly me…(fans self)

Hilo: (pushes swinging door open) Did someone say something about condoms on the floor?

Gryph: (mutters, as he enters the room to haul Hilo out again) Man’s as dirty as the Global Censorship Index.

AC: (looks back to Voryk, whose seductive smile has only increased) I think that’s…is it getting stuffy in here?

What kind of music are you playing whilst writing? If you don’t listen to music, what do you think your main character would listen to?

My taste in music is so eclectic, it really does depend on my mood and I don’t normally listen to it while I’m writing.  I think Voryk would listen to a collection of Blues and Jazz, Eric Clapton would undoubtedly be his favorite, but I think he might turn to something heavier while boxing it out in his holosuite.  Probably some earlier stuff by Bush, because it would still need to have that coating of sensuality to it.

All good things must come to an end! What is one book idea that you were really into, but lost interest in?

Ah, yes, that one book I swore I would finish!  I had this great idea for a children’s book with fairies and exotic birds that would tell the tale of the seasons in an adventurous way and I kept coming back to it for the longest time, making little changes here and expanding the plot there – but, alas, I cannot write children’s Lit.  I don’t regret never finishing it, though.  I just saw a similar book on Goodreads the other day, already published, so the story’s out there (more or less) and probably told in a much better way than I could have managed!

Yay, now I get to tag people!

And I’m going to *ahem* “borrow” Sabrina’s idea and leave the 5th tag open to:

5. You! Anyone who wants to join in is more than welcome.  Just follow the rules listed above and get to spreading the fun! 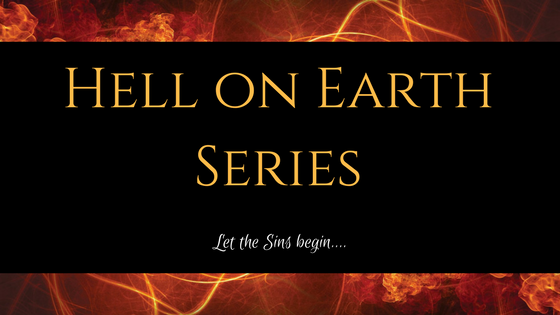