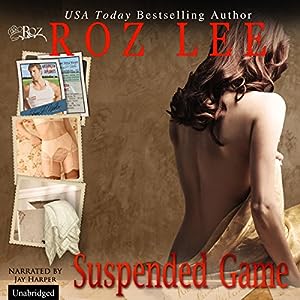 After five years spent proving his innocence in a gambling scheme, Jimmy Doyle Walker is back on the field for the Washington Diplomats. Given one season to demonstrate he can still contribute to the team, he guards his secrets well, knowing exposure of his unorthodox sex life would create a career-ending scandal. When he meets Evelyn Gardner, she tests his resolve, and he risks everything to show her the delights to be found in his arms.

Too bad her father, the preacher, seems set on ruining not only their reputations but also their lives.

USA Today Bestselling Author, Roz Lee is a displaced Texan who lives in New Jersey with her husband of almost four decades, and Bud, an overly large rescue dog who demands regular romps in the woods no matter how busy his parents are.

The mom of two daughters and grandma to the cutest baby boy ever, Roz collects Depression glass, and teacups with rose patterns. Her favorite food is Tex-Mex, and she’s never met a piece of chocolate she didn’t like.

When Roz isn’t writing, she’s reading, or traipsing around the country on one adventure or another. Warning—she brakes for antique stores!

Nicole Halstead is a submissive? Who would have thought it? Not her personal assistant, Kayla, Lady Kay to her friends in the lifestyle, but you learn all kinds of things about a person when you’re stuck in an elevator with them. Things like her kick-ass-take-no-prisoners boss suffers from claustrophobia, and she plans to spend Thanksgiving break at an exclusive, lesbian-only resort rumored to cater to all kinds of kink.

When Nicole goes into full panic mode, Kayla has little choice but to take charge of the situation, even if her actions have pink slip and law suit written all over them.

“Nicole!” Kayla fumbled in her bag for her phone. She never should have turned off the light in the first place. The fear in her boss’s voice took her by surprise. Never in her wildest dreams—and she’d had plenty of those—did she think the indomitable Nicole Halstead would be afraid of anything, much less something as harmless as being stuck in a dark elevator. The woman was a Titan of commerce. A ballbuster. Kayla had fantasized about reducing her to a quivering mass, but not like this.

She was no stranger to a woman’s fear, but it was usually something planned and meted out in small increments—as she chose. Not to mention, the person experiencing the fear did so willingly. This was completely different. Stay calm. Only one panic-stricken woman allowed per stuck elevator. Kayla took a deep breath to steady her hands. In no time, her fingers closed around her phone then light flooded the small compartment.

Her boss stood in the far corner, hands fisted and trembling beneath her chin, her eyes wide and her face pale.

“Are you okay?” Under the right circumstances, Kayla loved to see a woman’s fear, knew how to handle it, but this?

The panicked woman cowering in the corner was not the same person Kayla had grown to respect over the last few months. “We’ll be out of here soon. Relax.”

She checked the battery life on her phone. They had a half hour, maybe a little more, she judged, depending on how much juice the flashlight app used. Turning it off wasn’t an option. Using her foot, she scooted her purse into a corner then bent and placed the phone on top so the light illuminated as much of the car as possible.

Her boss’s breathless demand did nothing to ease Kayla’s concern. She had to get Nicole’s mind off their confinement—get her thinking about something else, something more pleasant. “It’s okay. We’ll be out soon. While we wait, why don’t you tell me about your vacation? Where did you say you were going?”

Nicole’s gaze remained fixed on the door. Her lips vibrated as she struggled to get a grip on her fear. “M-Maui. Saphros.”

Kayla froze. Surely she’d misheard. Saphros on Maui was one of the most exclusive lesbian-only resorts in the world, known for their women-only policy, but it was rumored they catered to all levels of kink as well. It was high on her bucket list of places to go if she ever won the lottery.

“I’ve got to get out of here.” Nicole lunged forward. Wedging her fingers into the seam between the doors, a sound ushered from her lips sounding more like a wild animal caught in a trap than a human.

Kayla reached for her. Grabbing her arms from behind, she tried to pull her away from the door. Nicole wrenched out of her grasp and spun around. Eyes wide with terror, she clawed at her blouse, managing to tear the neckline before Kayla could stop her.

Shit. She had to do something before Nicole hurt herself. She’d seen panic attacks before. Subs, eager to please, would refuse to use their safeword and end up in over their heads. Confidence and a clear head were called for. Could this circumstance be much different?

You can do this. Put on your big girl panties and take control. Forget she’s your boss, and put an end to this shit.

Squaring her shoulders, Kayla let go of the tight leash holding her dominant side in check. “Stop it right now, bitch!”

Nicole’s hands stilled. Her eyes focused on Kayla. And there it was—that flash of recognition. The woman knew a thing or two about submitting. Wasn’t her boss just full of surprises today?

USA Today Bestselling Author, Roz Lee is a displaced Texan who lives in New Jersey with her husband of almost four decades, and Bud, an overly large rescue dog who demands regular romps in the woods no matter how busy his parents are.

The mom of two daughters, one a police officer and the other an economist married to a pilot, Roz collects Depression glass, and teacups with rose patterns. Her favorite food is Tex-Mex, and she’s never met a piece of chocolate she didn’t like.

When Roz isn’t writing, she’s reading, or traipsing around the country on one adventure or another. Warning—she brakes for antique stores!